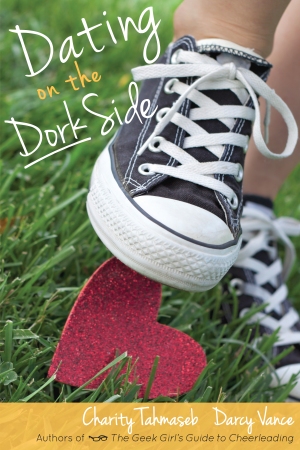 Today’s the day! Dating on the Dork Side is in the wild! The book is available in print and in Kindle format. Don’t have a Kindle? No worries. Download one of the Kindle apps (for iOS, Android, PC). You can read it that way. Or read it in print. That works too.

Stung by an epic betrayal, Camy Cavanaugh relies on the sure things: her best friend, her job as peer tutor, and her safe spot on the sidelines of life. But when she hacks into a secret, trash-talking website, it ignites a war between the sexes that won’t end until the whole school is turned upside down–and Camy’s world is turned inside out.

Now the hottest girls in school refuse to date the A-List boys. But with the Homecoming dance looming, everyone from the queen bee to the girl “most likely to” pushes Camy to hook them up with guys from the nerd herd.

And then there’s quarterback, A-lister–and former crush–Gavin Madison. He hasn’t spoken to Camy in three years … but he’s talking now, begging her to pair the guys on the football team with girls from the Honor Roll.

It’s a contest of wills and everything is on the line–even Camy’s heart. Will she retreat to the sidelines, or will she find the courage to get back in the game?

Curious? Read a couple of early reviews here and here.